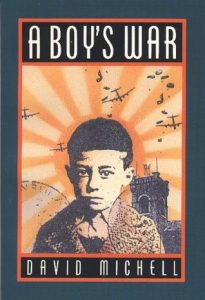 [As I discover, locate, and acquire books published by or about the China Inland Mission and the Overseas Missionary Fellowship, or by or about its members, I intend to introduce some of these publications to our blog readers from time to time. – Ka-Neng Au, Archivist and Librarian, OMF International.]

Beyond Chariots of Fire

Many of us have experienced (or are still enduring) stay-at-home notices, movement control orders, or city-wide lockdowns as a result of the Covid-19 pandemic. As disruptive as the current conditions have been, the situation faced by our colleagues in the China Inland Mission (the predecessor organization to OMF International) and their children in China during the Second World War cannot be understated. Beginning in December 1941, their ordeals would progress from a limited food supply to being restricted to activities in certain buildings only, to being confined in a ‘Civic Assembly Centre’ (more commonly known as an internment camp).

You are probably familiar with the motion picture “Chariots of Fire,” which depicts the life of the missionary and Olympian Eric Liddell. Part of the story is set at Weihsien internment camp, where Liddell invests much of his energy in ministering to the young people. Over one hundred of these boys and girls had been detained by invading Japanese troops while they were at CIM’s Chefoo School. The children and school staff were then moved across town and confined for several months at Temple Hill Camp, and finally relocated about 150 miles inland to Weihsien Camp.

Within our Fellowship, the most well-known account of life in an internment camp is A Boy’s War by David Michell, oldest son of a CIM couple, who would subsequently join OMF to serve in Japan and then in Canada as the Home Director. In his book, Michell does write about Eric Liddell and his contributions to the physical and spiritual well-being of the children in the camp.

Let me highlight some other books with stories from CIM internees. 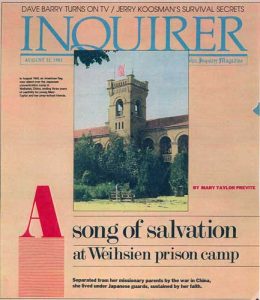 Another Chefoo student whose life was greatly influenced by Eric Liddell was Steve Metcalf, a child of CIM members who were serving in Western China when war broke out. Metcalf was challenged by Liddell to love their captors and Metcalf pledged to do just that. After the war, he joined OMF and took the good news to the Japanese people. The full story can be found in his biography In Japan the Crickets Cry by Ronald Clements.

Four of J. Hudson Taylor’s great-grandchildren were at Weihsien during the war. A Song of Salvation at Weihsien Prison Camp was written by Mary Taylor after she had gotten married to Ernest Previte and moved to New Jersey. Her recollections were subsequently translated into Chinese and a bilingual edition was published in book form.

Other Chefusians who have published their recollections include Raymond Moore, who devoted several chapters of his autobiography, Moondani Kyema, to his time as a war internee at Weihsien, and John Hoyte, whose book is entitled Persistence of Light. Raymond Moore is the oldest son of Percy and Amy Moore, while John Hoyte’s parents were Stanley and Grace Hoyte. 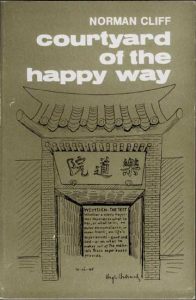 The Weihsien camp had another name: “The Courtyard of the Happy Way” (樂 道 院) from the signboard above the entrance gateway. Norman Cliff wrote about his experiences during the war in his book of that name, The Courtyard of the Happy Way. Cliff also wrote Prisoners of the Samurai, an overview and description of all of the internment camps run by the Japanese in China between 1941-1945. The book includes some recollections of some of the 11,000 inmates.

After war’s end, the Mission leaders gratefully acknowledged God’s merciful deliverance of the internees from the various camps. May we reflect on God’s faithfulness in the past and continue to be thankful for the freedoms we enjoy today.